VozSays is a mobile polling platform targeting the Latin American community to increase engagement and expand outreach by fostering discussions about the topics most important to them. VozSays sought to bring about political engagement to a growing demographic on the local and national topics they care about.

How can the Latin American community engage with each other on political topics? How can we strive to stay respectful and open to viewpoints regarding how we decide to run our affairs? When the issues and representatives become as divisive as ever, how can we reach an understanding?

VozSays allows people to coalesce around some of the major topics affecting local and national Latin American Communities. It was designed to help people engage with others to gain insight into positions and perspectives that shape the fabric of our democratic values.

Increase and maintain an active, engaged political base for a growing Demographic. Building on communities who could share ideas on a wide range of topics that they didn't know could affect them. Election seasons are cyclical, so rather than focusing exclusively on growth, VozSays had the objective of fostering a brand that promotes inclusivity, and levity when discussing the issues of our day.

This app is primarily targeted at Latin Americans, ages 18-54 who are engaged. VozSays as an organization already does engagement with this group, so the app was designed to foster more communication and sharing of ideas with that community.

The audience is expected to have at least a nominal interest in political topics that affect them. They may not be associated with any particular candidate or ideology, but will likely be involved in more of the administrative workings of policy.

Conducted research and design. Performed duties related to analysis. Created designs and interactive prototypes. Outside of my role as a designer, there were two business analysts, a project manager, and three developers for this project

The upcoming 2016 election season and political activity surrounding it created considerable time constraints for the research and design projects. Coordination with the project manager was needed to plan research interviews, validate the results, and produce design results. Though this was a new project, there was considerable coordination that needs to happen with existing communication methods that were maintained by VozSays.

Initial Application designs were conceived after interviews with VozSays staff and clients. The interviews help to establish what the organization was put, its mission statement, and what problems they wanted to solve. Initially, the direction for defining the app features was very centralized but started to include more members of the community as the ideas became more polished. 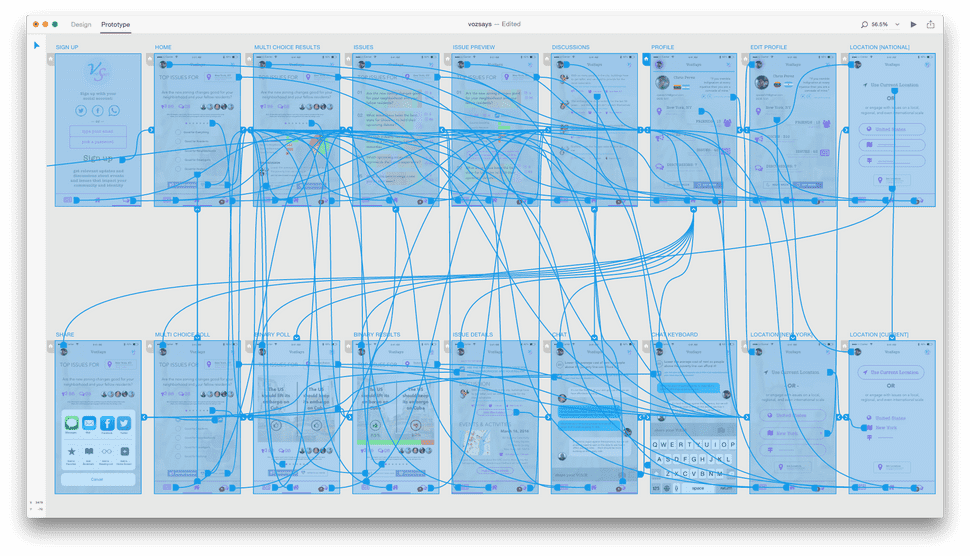 Initial Designs displayed features as described by the VozSays staff, which primarily revolved around polling and discussions.

User testing would follow after initial designs to flesh out how well groups interacted to different policy scenarios. Based on feedback from community staffers and organizers, the application turned to a more curated approach. The application promoted the creation of new polls and made it easy to ask questions and share results. Proper long term content strategy was needed to complement this application.

The direction of the application is not to offer a model of growth but to foster communication amongst those that are most engaged with solving community problems. With more interviews and research with community members, the idea quickly shifted towards making it as easy as possible to ask questions and learn from each other.

The initial set of mockups featured sections to view news, polls, and discussions, with a place to view the profile. Eventually, the profile was moved into the bottom bar to simplify and streamline navigation

To establish polling types and ease facilitation of content production, a limit was set to with polling format. There are binary polls that reflect the two-wing political framing emphasized in American Politics. 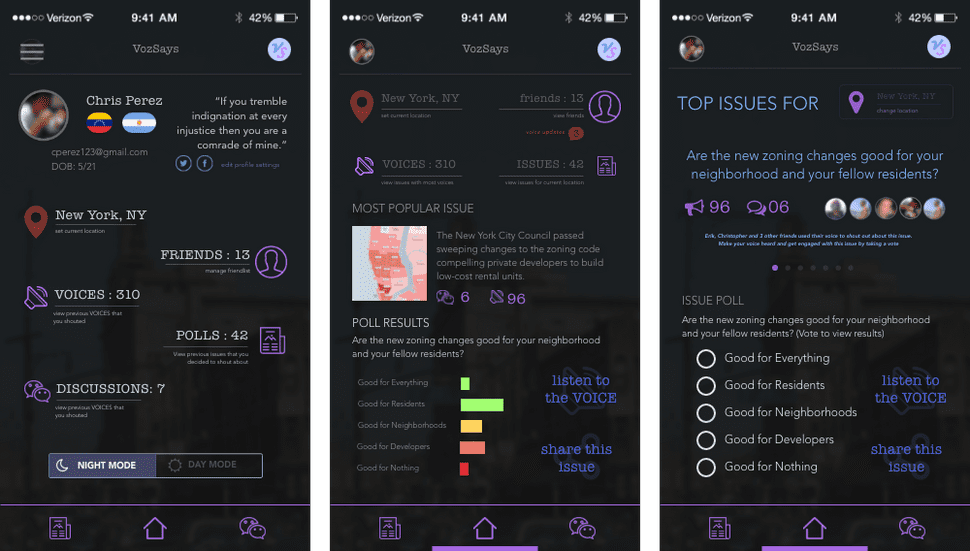 Adjustments were needed to accommodate branding and separate new polling questions from the polling results and their corresponding discussions. Binary polls reuse the simplicity of tinder's interface and apply easy responses to positions. There are also multiple-choice questions that feature more nuanced answers but are still intended to be simple and easy to engage with. 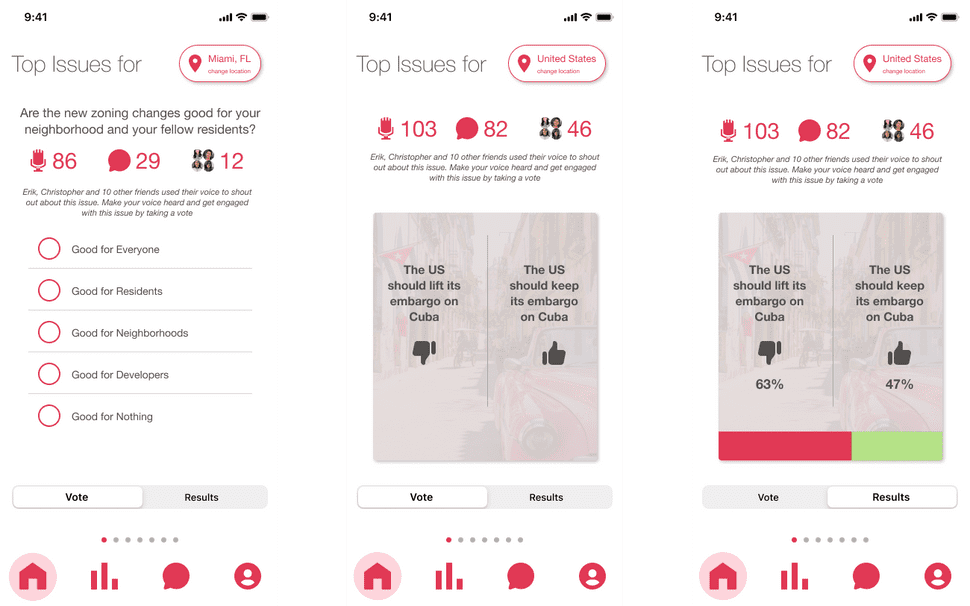 VozSays features a simple home screen to reflect a curated list of polls that show how many people voted, commented, and are engaging with any one particular poll question.

Users could switch between voting and viewing the results. There were discussions about whether participants can view results before voting, and testing was done to see the results of various decisions. There were tradeoffs with either decision as testing revealed that revealing results before votes led to more engagement, and votes, but often led to less balanced discussions. The team opted to get more engagement and sought to develop strategies in curation and moderation to manage how discussions evolved. This led to an evolution in the app design where users could see the list of results for the polls with the most engagement. 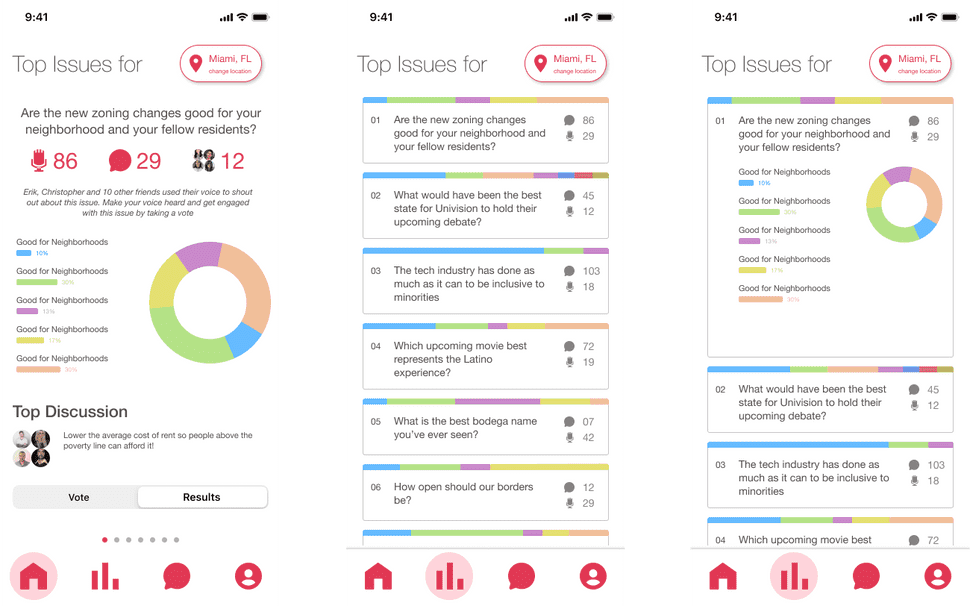 Voters could view the results and start a new discussion related to the poll. They can also view various other top issues depending on what location is selected

Voters can select which polls and discussions they want to engage with, but there is a voter profile that is associated with voting identity. The basic info shows the name, national origin, previous discussions, selected locality, and other information that details their political advocacy. When engaging with a poll, or trying to achieve a desired political result, voters can also register a community event to meet up in person and discuss action steps to advance a cause. 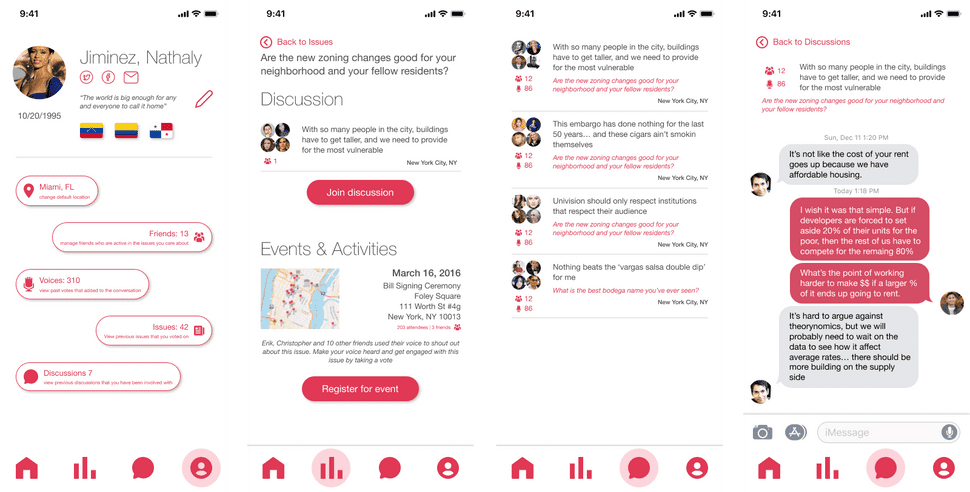 Use your profile to set the voter's identity and go into the topics and positions they are most engaged with. Have discussions with other people to debate topics or collaborate to bring about change

VozSays sought to streamline how to understand the positions of nuanced topics within a vast community. There was always a more important thing than whether to vote for one candidate or another. The idea was to make people understand how to engage with policy and ask questions to understand why things happen a certain way. To have trust in the process means getting closer to its inner workings. And be linking individual voters with community-based organizations.

Many features were considered outside the final delivered product. By coming together to share a message, VozSays can potentially gather up like-minded individuals to collectively make a change for policies they believe in.

From inception and research to launch, VozSays was a political project aimed at fostering and expanding conversation through the Latin American Community. Given the political context, sample sizes need to account for the difference in opinion amongst various administrative members to keep content balanced. Content, whether curated or user-generated was going to be the driver, problems, and solution, to how the engagement evolved.

With VozSays, there were many ways to vote and express opinions and take stances ranging from simple to nuanced. The purpose was to let the community be heard and view the results of others who have stakes in their positions.