Use your Little Black Book to get control of your dating life. Store all the contacts, interests, activities, and upcoming dates that help you plan that special day with the next special someone.

Those without love might at least be looking for it. We all know there are plenty of dating apps to get you plenty of new matches, but what's next after finding all those potential love interests.

Rather than letting your dating contacts take up space and languish in your address book or dating app, you can keep track of them in your little black book. There are so many apps to help you find new dates. But how can you securely record, rank, and follow up with your dates so you can find the right partner for you?

To help people organize and rank their potential matches in search of finding the one. Little Black Book hopes to keep track of contacts, activities, and interests to make it easy to plan the next date. For each of your contacts, you can list all the important and relevant details like name, pictures, birthday, meeting place, and preferred communication method. User testing would serve to firmly establish a business model and app feature direction.

Measure of Success: Growth and amount of feature purchases. The business model is dependent on application sales. Metrics would seek to improve interest and downloads.

The target audience includes singles of any gender between the ages of 25-55 in large cities. Testing was predominately done in New York and Miami markets.

Researcher, Analysis, and Design/Prototyping. Additionally, there was a business analyst and developer.

A prototype solution was used to devise and establish a feature set and establish the direction for Little Black Book's business model. A chat room for singles was set up to understand how singles used their existing dating apps, and how the application could handle candidates from multiple sources. Prototypes were created and collaborated on Adobe XD and Figma. Observational studies were performed in one-on-one sessions.

Application designs were devised based on initial client assumptions and user-tested as they underwent multiple transitions with the same group of users. After preliminary explanatory testing proved the feasibility and demand of the product. Personas and information architecture was quickly devised to create prototypes to test.

An initial structure was needed to define basic features and functionality. After Testing and observational research, the structure and organization went through various changes. Initial Focus groups focused on expanding on goals that may have already be solved by dating apps. The Final structure is meant to be simpler and focus only on needed features

Interviews and observation trials were initially launched on the brutal NYC Dating scene to come up with designs to help people keep track of who they like and, more importantly, why they like them. After creating the designs, they were properly confirmed and analyzed with the client, Mohit Dhir, and ultimately developed and tested with end-users trying it out to keep track of their love interest.

Initial exploratory focus groups for feature requests and ideas happened with four groups of five over two sessions, where questions and results were similar, but samples were adjusted to account for age, gender, and preferred dating app (if applicable).

Afterward, a separate group of 6 would engage in continual observational and contextual inquiry studies to see how they interacted with changing prototypes. They would use several revisions of the app to ascertain, if their initial goals changed, if their goals were more quickly resolved, and which features are used the most and which new features were requested. Initial app designs and structure were discussed with the client and rapidly created. 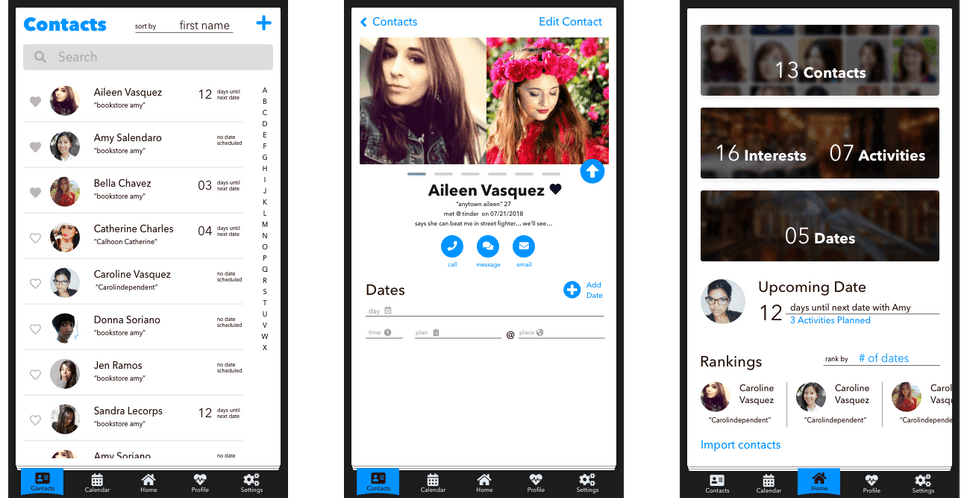 Results from the studies were confirmed by those who chose to forgo dating apps in regards to managing their dating lives. Everything revolved around the people, plans, and timing when it comes to setting up the next date. People want to know where to go, who they will meet, and when they will meet up before anything else. This allowed the opportunity to narrow the scope of what Little Black Book offers. 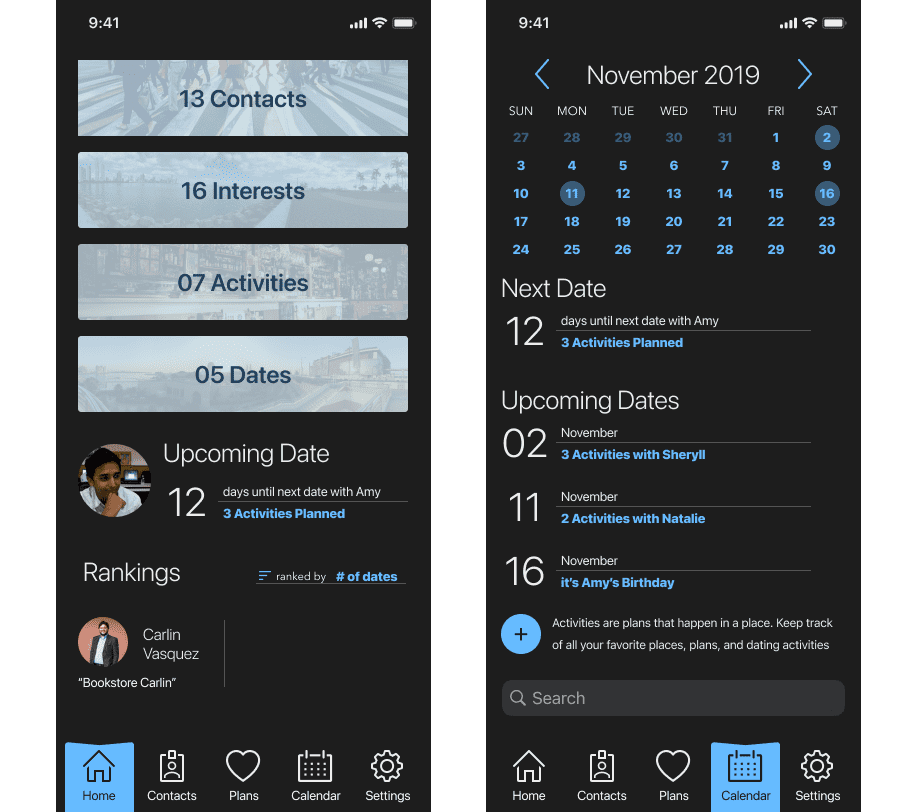 From the home screen, the main priorities come into view. Mainly viewing and accessing contacts, plans (sorted into interest and activities), and dates. The initial screen is context-sensitive in detailing which dates are coming up and who is most highly ranked

The home screen functions as merely a way to access the important features and contextually important. After that, daters will need to access and manage all of their dates. 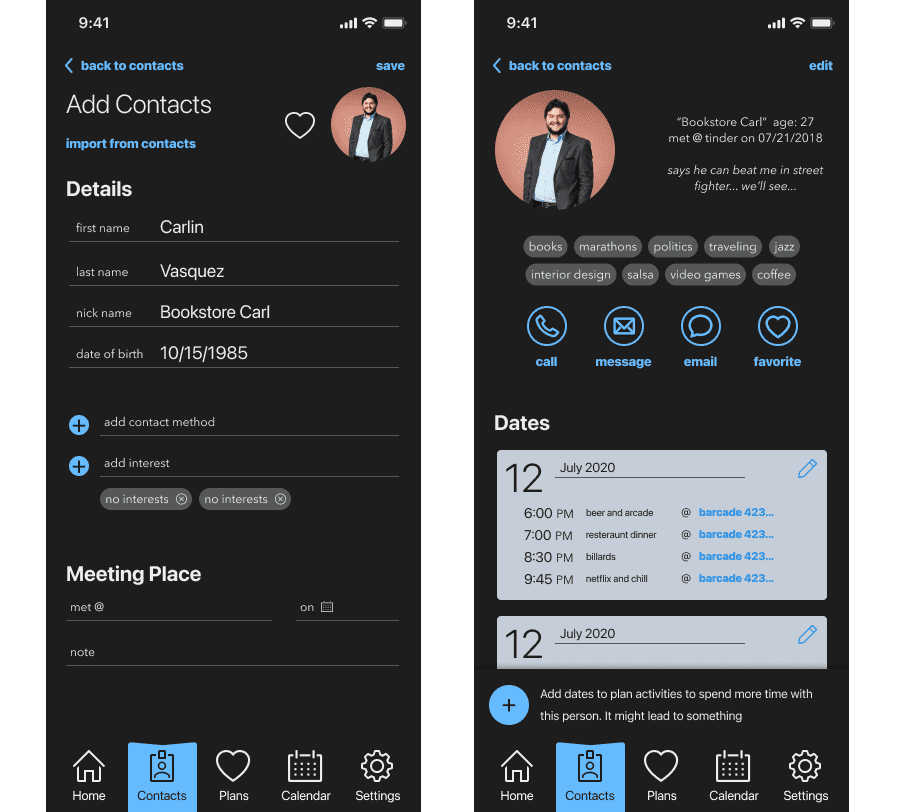 While there may be plenty of fish in the sea, there can also be too many but some may stand out more than others. After testing, it appears that contacts are regularly cycled and adjusted, with potential matches lasting 2 weeks on average.

This supports the idea of selecting your favorite dates and contacts to match with some of your interests and activities. Interests are a simple list of all the things you like to do. While activities are made up of plans and places, making them easy to schedule the next date using them. After everything is set up and planned, you can look through your calendar to see all the upcoming dates and get a sense of your agenda. 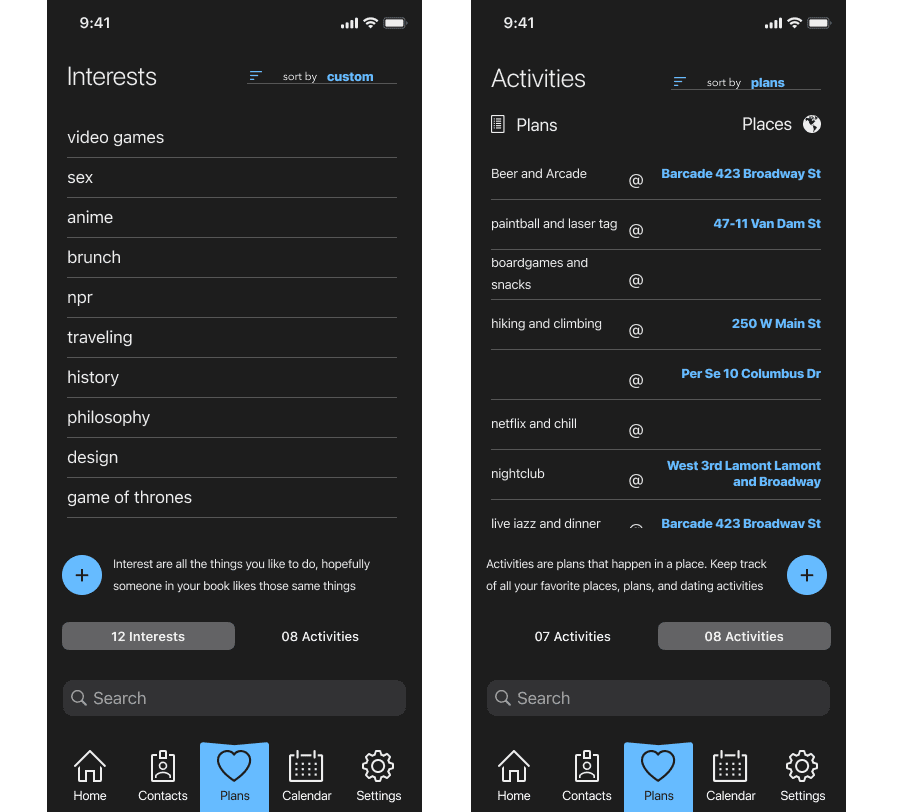 Users helped to resolve privacy concerns with regards to locations when it came to their favorite dating spots.

Rather than affiliate planning through retail locations, there are only simple map location coordinates. People enjoyed the flexibility of saying what their favorite plans were. The initial design gave direction for the application and how to approach business decisions. There was a lot of advocation for privacy with personalization when it came to setting up their little black book.

The design solution was delivered via an interactive prototype to establish the basic feature set of the application. Challenges came from understanding different perspectives and motivations behind dating, and how personal the information can be to them. The solution and the exploratory validation led to the development of the application with a similar feature set and monetary feature-based business model.

When establishing a feature set, there were considerable tradeoffs to consider between storing and sharing data. It could be easier to make recommendations about places to go, but people are worried about data about where they have dates being private.