Sharing a bit about myself by publishing what I write. This is where you can find opinionated writeups discussing various topics of interest including:

Speaking softly in a world that wants you publicized

Imagine a dream world where everyone could be privately famous. Where the things we say could only be heard by the people that were meant to hear it. No government bodies could penetrate our digital communications, and we could all speak without a care in the world under the guise of love and freedom. Such a world can’t be delivered by the internet we know today. But chances are high that we all already accepted that. It won’t stop us from longing for the web to be a simple series of tubes where everyone was supposed to meet up and solve all societal ills. When it was innocent, the web could have been anything to anybody, and yet big names have corralled our thoughts into their money-making dens. It’s ok because we all accepted and expected that as well. Only the determined could build a digital utopia where we could all congregate and speak our minds.

There is a line between public and private, but the internet drives recklessly over it. Did you feel any more comfortable after playing with a myriad of privacy settings? No matter what options we choose, people riding atop their packs of high horses stand ready to be disgusted and offended at our musings. The dichotomy between the public sphere, where we share our opinions in an expressive fury, and the private ecosystem, where business interests bless us with the tools to speak louder to larger audiences, is real. And if we handle it wrong, that contrast can wreak havoc on an online persona, and morph into devastating results in the physical world.

Our own little world…that doesn’t belong to us

The platforms we speak from are shaky at best because we lay no claim to them. We speak for ourselves, but the words aren’t ours. Should any of these large social platforms collapse, would every past contribution be wasted? Depends on who you ask, but it's best to act like these communications were never meant to be owned. But then again, we only care about owning things that can be recorded and monetized.

So I should contact you from where with what now?

The sooner we own up to our self-imposed illusions, the better. There is always a master to feed, even if we can’t see who we’re bowing to. We maintain an onerous infrastructure just to sustain those conversations with our friends, family, and colleagues. We can pay up or sell our time and minds to whatever ad influences us. Such is the price of the platform. It's pretty convenient though, so it's worth indulging in it. Communication is pervasive in that way, leaving us to seek out means of conducting it on every device we carry, and every technology we regularly interact with. We’re slaves to the service, where we will need to get whatever app, for whatever phone, watch, glasses, contacts, car device, or unpredicted toy the ‘internet of things’ throws at us next. The people we connect to are addicting, and we will serve any master available to keep those connections.

Walking amongst the public

It’s all so tiring. Who should I put in which Facebook Group? Does this person fit in that Google+ circle? Will this public account retweet my private tweet? Am I offending someone? Is my boss or interviewer going to read this? Was that PG-13? Real-world communications never felt this complicated. Then again the joy in it was how ephemeral the conversations were. They weren’t recorded and couldn’t be referenced in the same way. Ignorance was bliss and people jump from topic to topic without the burden of unimportant details. We can’t even plan terrorist operations digitally for fear that we may tip off the NSA or any other clandestine government body. Being that I am a citizen, I guess I’ll play along. In the security/privacy paradox, behavior modification has always been the vanguard for privacy. The best argument for maintaining our little world where we can do whatever we want free from judgment and persecution. But let's all agree to do our robot dance if it lets us connect with our family and friends. 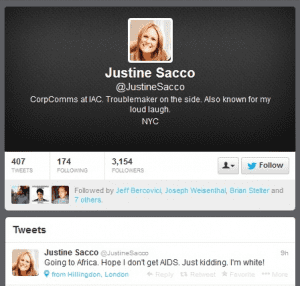 Time to hope for something else

The internet is still the internet… ecosystems be damned. The expectation of privacy will leave you and your reputation scarred. It shouldn’t be worth considering anymore. Outside of small group chats and one on one communications, it has been easier to just assume that everything is written could be read by anyone. And even with those close-knit communications, there is no point in taking such unnecessary risk. While we may not worry about catching AIDS in the depths of South Africa, we certainly can spread thoughts that just weren’t meant for public consumption. And since the public festers with a primal sense of superiority, it won’t care. Anonymity is going by the wayside. It’s increasingly likely that your name and photo are aligned with what you say. Tread lightly when the rest of the world knows who you are, cause the world has remarkable hearing and is highly sensitive. Relying on silly privacy settings from companies that see little incentive in preserving your privacy is not only pointless, it feeds into the false notion that you can say stupid things with no consequences. Just turn all privacy settings off, and foster a greater relationship with the new public sphere.

Speak in the present, Listen in the future.

In the digital public sphere, we speak to more than one tense. The bare tits you post on Instagram will age more gracefully than the genuine article, enshrined for all future generations to see on the photo album of life. We speak in the present without thinking in the future and reflecting on the past. We got our ‘privacy’, so what's the worse that can happen? The past is full of regrets, and the future is full of anxiety, while the present is full of happiness… or so they say. But we don’t post, picture, write, consume, or produce one tense at a time. It all moves to the flow of your life. If you were to unexpectedly gain publicity, enemies will turn your past into your present, and your expectations of past privacy won’t matter. While righteous and purposeful, internet privacy is also a virus. There is a reason privacy is lost. Privacy can’t go viral, and what value is there is something that can’t be shared. Privacy is boring because it reveals nothing beyond what we don’t want to reveal about ourselves.

But even in a private ecosystem, we traverse the internet in a public sphere. We can’t just walk around with our balls hanging out. Advocates are fighting to treat this space as a public utility, and someone needs to think of the children. Fetter your opinions and hold your tongue, no matter how few (or many) people you think are listening. Your reputation is at stake, and if you can’t handle the fame, it would be best not to traverse the seas of the web.